More Brains! A Return to the Living Dead
1540 views - 0 comments 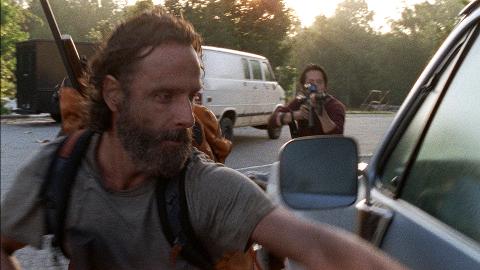 Comic Story Version:  Wounded in the line of duty, Cynthiana, Kentucky police officer Rick Grimes awakens from a coma in the hospital to find his town filled with walking corpses. He travels to Atlanta, Georgia in search of his wife Lori and seven-year-old son Carl, and finds them in a small camp outside the ruined city, under the leadership of his partner and best friend Shane (who, unbeknownst to Rick, had an affair with Lori). After a fatal zombie attack on the camp, Rick begins to frequently criticize Shane for his decision-making, while at the same time earning the rest of the group's trust and becoming a co-leader. They end up being at odds with what the next move for the group should be. Shane eventually is overwhelmed with his jealousy toward Rick and, following a public outburst, pulls a gun on him when the two are alone in the woods, only to be shot dead by Carl (who had secretly followed them). Now the de facto leader, Rick decides the survivors need to leave Atlanta and find a safer place to call home.

Rick’s early settlement attempt is a gated condo neighborhood, where the group is joined by a middle aged former NFL player Tyreese, his daughter Julie, and her nerdy boyfriend Chris. When settled in, Dale and Andrea engage in a relationship, as do Carol and Tyreese. The settlement attempt proves disastrous, however, as Allen's wife Donna is killed after the survivors realize the neighborhood is infested with zombies. Following their narrow escape, they camp for a single night on the road, where Lori reveals to Rick that she is pregnant. The next morning, during a hunting expedition, Carl is shot by a redneck named Otis. They're guided to a farm, where the owner, Hershel Greene, invites the group to stay. They take temporary refuge here; Glenn engages in a relationship with Hershel's daughter, Maggie, and Allen struggles with Donna's death. Peace on the farm is maintained until zombies manage to break free from the barn and kill several members of Hershel's family. Hershel's tolerance of the group quickly wears thin when he hears them talking about staying permanently, and he orders Rick at gunpoint to collect everyone and leave. Glenn is permitted to stay because of Maggie's insistence.
Rick and his group discover an abandoned prison with excellent security, complete with a zombie-proof fence, lookout posts, food and water, and a large supply of ammo and riot gear inside. Also in the prison are four surviving inmates, who are cautiously incorporated into the group. The group invites Hershel and his family to join them at the prison and the offer is accepted, although Otis stays behind to care for the livestock. Days after they settle in, Julie and Chris attempt to execute a suicide pact simultaneously; however, Chris fires too early. Tyreese strangles him to death upon discovering Julie and later mangles Chris' corpse. Rick becomes worried about Tyreese's unexpectedly calm and normal attitude after what had happened. Danger soon comes from within: a psychotic inmate murders Hershel’s two youngest daughters, and Rick kills another inmate during an attempted coup against his group.
During this time, a mysterious woman, Michonne, follows Otis to the prison and saves him from zombies, which earns her keep inside of the prison. She begins to seduce Tyreese, which Carol eventually witnesses and which leads to Carol's attempted suicide. In the aftermath, Rick and Tyreese's friendship becomes strained and culminates in a brutal argument and fight between the two. Proven to be increasingly erratic and unhinged as he struggles to keep order, Rick is forced to step down as the group’s leader; he is replaced by a committee consisting of Dale, Hershel, Tyreese and himself.
Rick, Glenn and Michonne later leave the prison to investigate a nearby helicopter crash and eventually stumble upon Woodbury, a walled-off survivor town, formed by, and under the leadership of, a maniacal tyrant called The Governor. The walls have offered protection for months; however, it is revealed that they are slowly beginning to weaken, a matter which seemingly is hidden from the community by The Governor and his top men. It is revealed that the people in the helicopter were from a news crew, who were killed and fed to the zombies to keep them at bay. When the three refuse to tell him the location of the prison, the Governor imprisons and tortures them, cutting off Rick's right hand and sadistically raping Michonne while forcing Glenn to listen to her agony in the next room. The Governor eventually has one of his men, Martinez, let them go and tail them back home, pretending to help them escape. On her way out of town with the rest, Michonne tortures and mutilates the Governor while he's defenseless inside of his house. Shortly after returning to the prison, Rick catches Martinez in the act of escaping back to Woodbury and, despite the man's pleas that he was only going to gather the 'good' people, strangles him to death.